The upper part of the Soča Trail starts at the Koča pri Izviru Soče (Hut by the Source of the Soča) and ends at Na Logu in Trenta with a visit to the TNP Information Centre. From the hut, there is only a short walk to the source of the Soča. The Soča Trail, however, starts just below the hut at the first information board which presents the course of the trail and marks the locations of other information points. This part of the trail contains seven information points informing the visitor about the history, cultural and technical heritage of the valley, natural attractions with their typical animal and plant species and geologic features and forestry.

The trail runs from the source of the Soča just above the river and then turns onto the Vršič – Trenta road. At the first curve, there is the monument to Dr Julius Kugy. It is located at a highly picturesque site offering splendid views towards Zadnja Trenta and Jalovec, the Trenta valley and the mountain ridges which surround it. The farm below the monument, called the Turer farm, is an outstanding example of the valley's architectural heritage. The trail descends towards the Mlinarica Gorge, then continues along the road to the first bridge, suddenly moving to the right bank of the Soča and proceeding until the Church of Our Lady of Loretto. Cross the footbridge to get to the church, or go 200 metres back along the main road to visit Alpinum Juliana, the only Slovenian Alpine botanical garden, arranged in 1926.

Walk along the right bank of the river above the camping site, where the path rises slightly until you reach the next footbridge. On the other bank of the river, you can see a reconstructed timber chute (riža) and a Venetian saw, both important elements of the technical heritage of the Trenta valley. In only 5 minutes, you come to the centre of the Trenta village, called Na Logu. »Dom Trenta«, the TNP Information Centre, houses an attractive presentation of the Triglav National Park and the Trenta Museum displaying the cultural heritage of the valley and a reconstruction of life on pastures and diary farming in the area.

Estimated time: 2.30h for this part of the Soča Trail (visit to the TNP Information Centre and Alpinum Juliana not included).

Guided tours: In July and August, the Soča Trail Tour starts at 9.00am every Thursday. Meeting point: Hut by the Source of the Soča. Free-of-charge transport to the starting point is organised. Price: 6 EUR for adults, discounts for children and students. The price includes entrance to the TNP Information Centre.

This part of the Soča Trail starts at Markov most (Marka Bridge). Park your car at Gostilna Metoja and walk along the main road to the Triglav Campsite, then turn onto the road descending left towards the campsite just before the bridge. From there, the trail runs straight along the left bank of the river. You will walk through forests, across meadows and pastures, past rockslides, near or above the river, never losing sight of the majestic mountain peaks rising above the valley. This portion of the trail boasts four footbridges which can shorten the course of the trail significantly. This end of the trail is extremely picturesque as it runs through highly diverse and rich landscape. At several points, you can step down to the river and have a peaceful rest in the shade of a giant boulder or a tree. Two information boards have been put up, providing visitors with information on rockslides and vegetation.

As you near the end of this part of the Soča Trail, the path rises steeply to a small waterfall. You will reach the waterfall after about 20 minutes of walking, and descend from there to the Jelinčič Tourist Farm (Turistična kmetija Jelinčič) and the small troughs of the Soča.

Downstream from this point sport fishing on the Soča is permitted.

Access: by car to the car park at Gostilna Metoja, by bus to the Triglav Campsite. As the trail is not circular, use of bus is recommended.

Estimated time: 2.30h for this part of the Soča Trail.

The walk along the Soča Trail between the Small and Big Troughs begins right after the bridge to the village (by the Jelinčič Tourist Farm and Korita Campsite). The trail forks right after the bridge, and follows a gravel road to the footbridge. The information board on the architectural heritage of Trenta has been erected by the footbridge. The trail then runs along the left bank of the Soča to the village of the same name.

You can cross the river and take a look at the church of St Joseph and a cemetery of Austrian soldiers who died during the First World War. The church of St Joseph was built in 1718. In 1944 it was renovated and painted by Tone Kralj. Kralj painted the interior of the church in the colours of the Slovenian flag and depicted Hilter and Mussolini as God's enemies.

From the village of Soča, the trail runs straight along the left bank of the river. Below the village another natural attraction awaits: Big Troughs of the Soča (Velika korita Soče). Standing on a swinging footbridge you can take a good look at the 750-metre long and 10-to-12-metre-deep picturesque troughs. In some places, the troughs are only 2m wide. The Soča Trail takes you just above the troughs until they end at the beginning of a Trenta's side valley, Lepena.

You will come to the road for the Lepena valley and after about 5 minutes of walking descend to the river again and take a look at the end of the magnificent Big Troughs. You will no doubt enjoy the play of trout in the deep, emerald-green pools of the river.

Further downstream, kayaking on the Soča and sport fishing on the Lepenca river are permitted.

Access: by car to a small car park, leave the main road at the turn-off for the village of Vas na skali. As the trail is not circular, use of bus is recommended.

Estimated time: 1.30h for this part of the Soča Trail.

From the confluence of the Lepenca and Soča rivers, the Soča Trail continues along the valley to Kršovec where it joins the Bovec Walking Trail. The path starts at the Klin Campsite. Cross the bridge over the Lepenca just before the stream meets the Soča. In this part the Soča calms down and widens, its bed extending into wide stretches of pebble. The trail runs past the confluence of the two rivers, where an information board with data on the Marble Trout is put up, and across meadows from which numerous tiny fishermen's paths wind rightwards to the river from the meadows nearby. After about 30 minutes of walking, there is a footbridge under military bunkers, which takes the trail to the right bank of the Soča.

The Soča, fortified by the Lepenca, forms deep, turquoise pools which are a true challenge to fly-fishers. The trail proceeds between the road and the Soča river, although the presence of the road is barely noticeable.

Access: by car to Penzion Kamp Klin or to the car park on the right side of the road to Lepena. As the trail is not circular, use of bus is recommended.

Estimated time: 1.30h for this part of the Soča Trail. 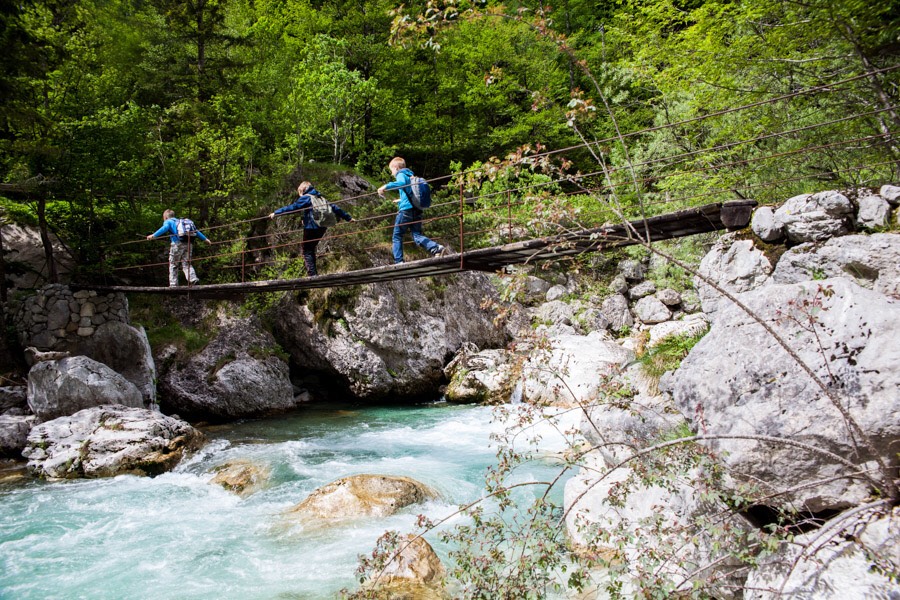 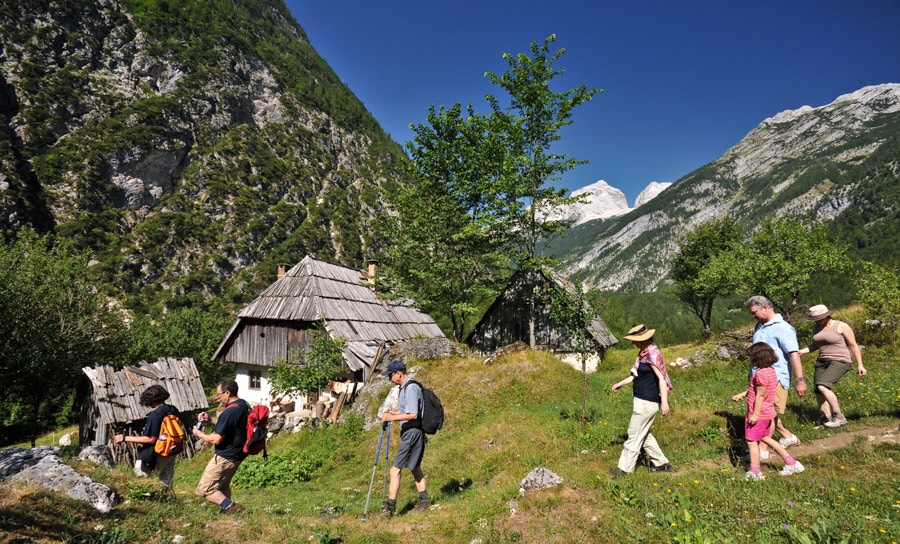 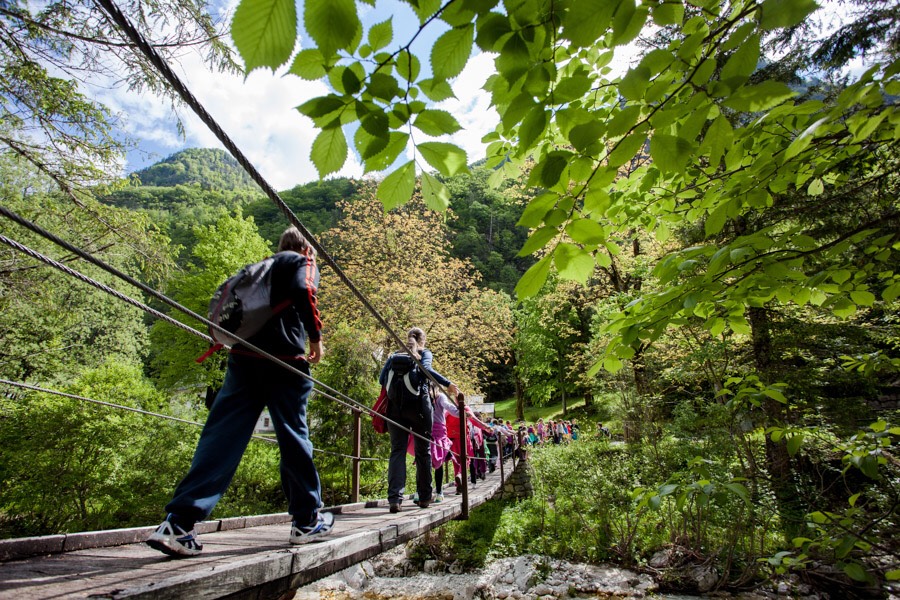 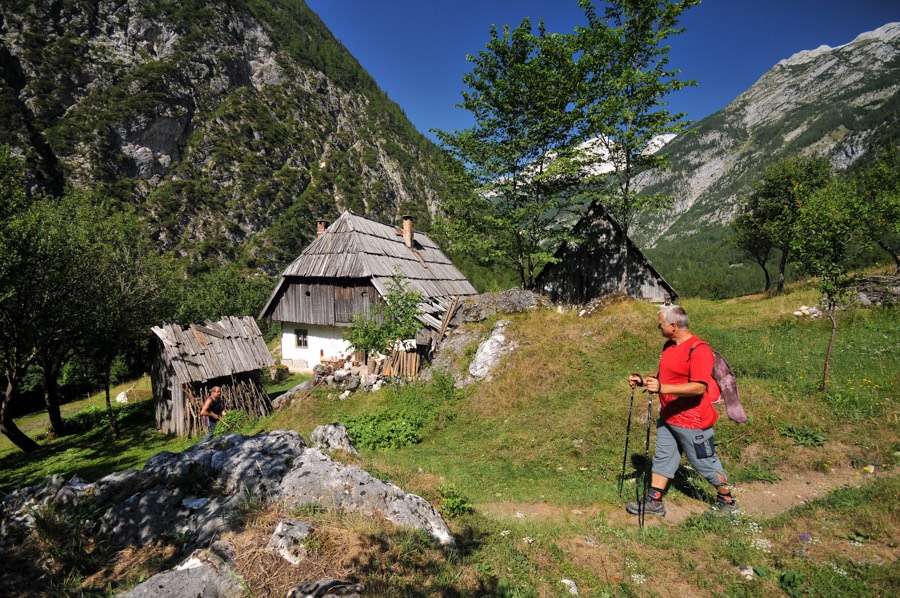 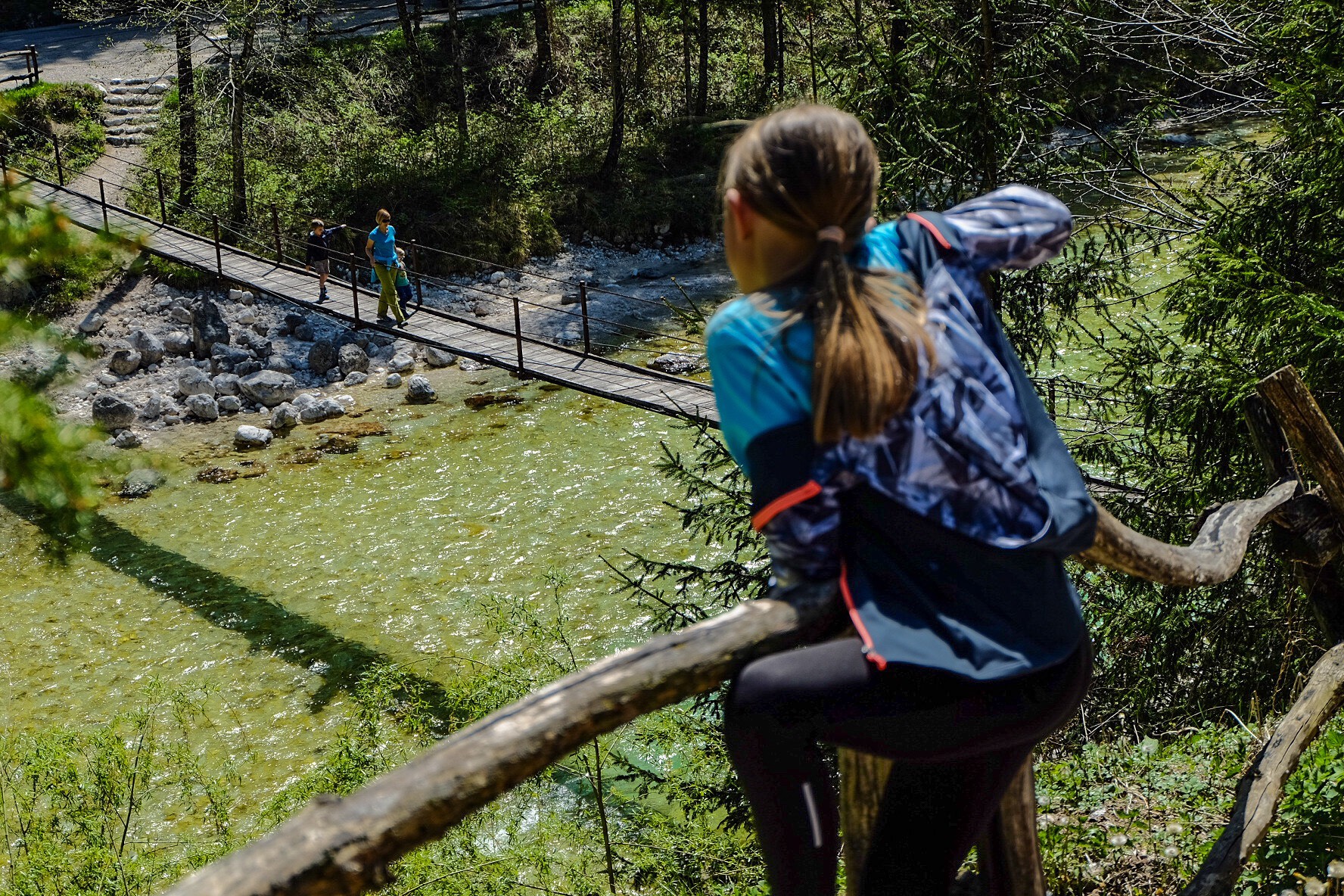 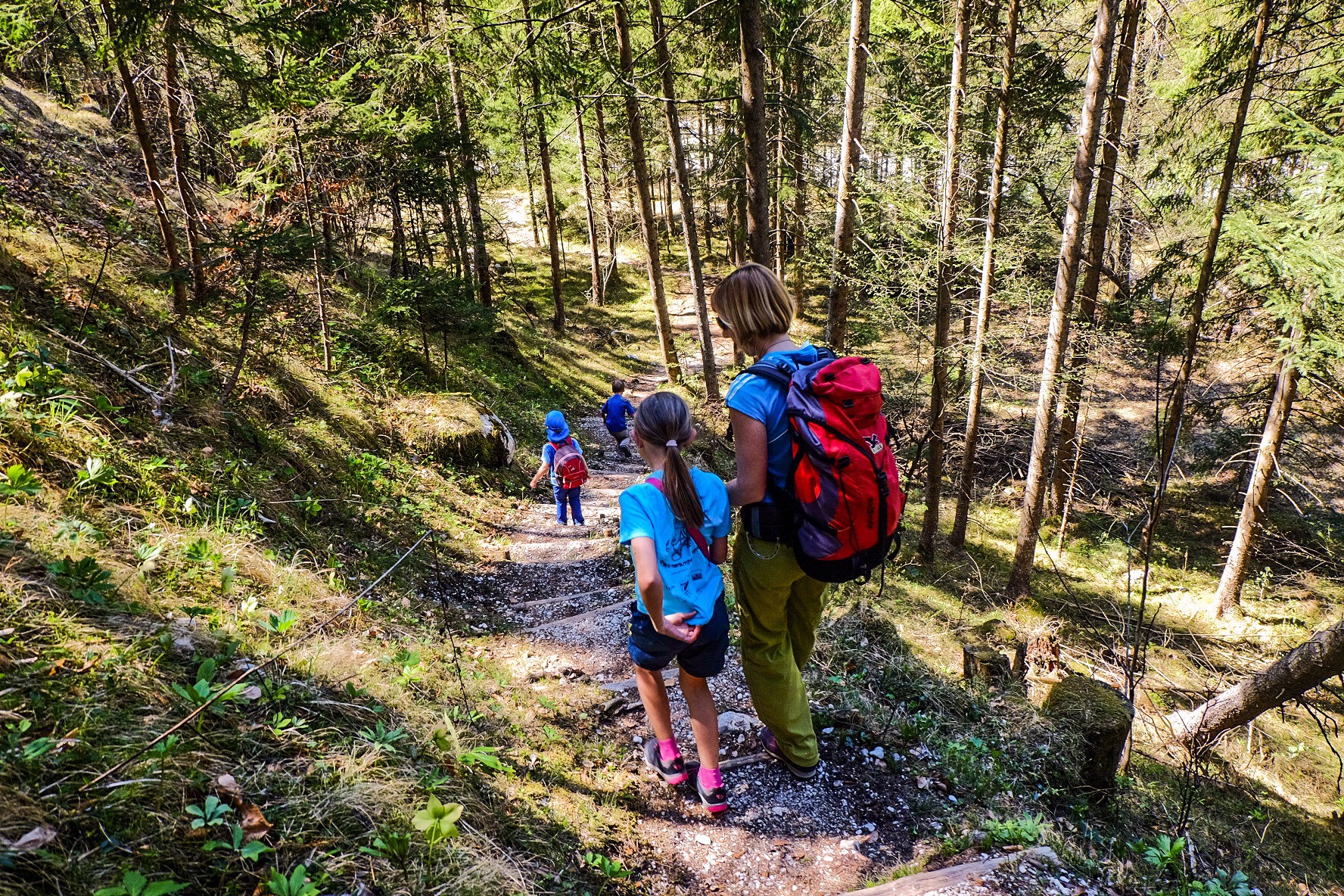 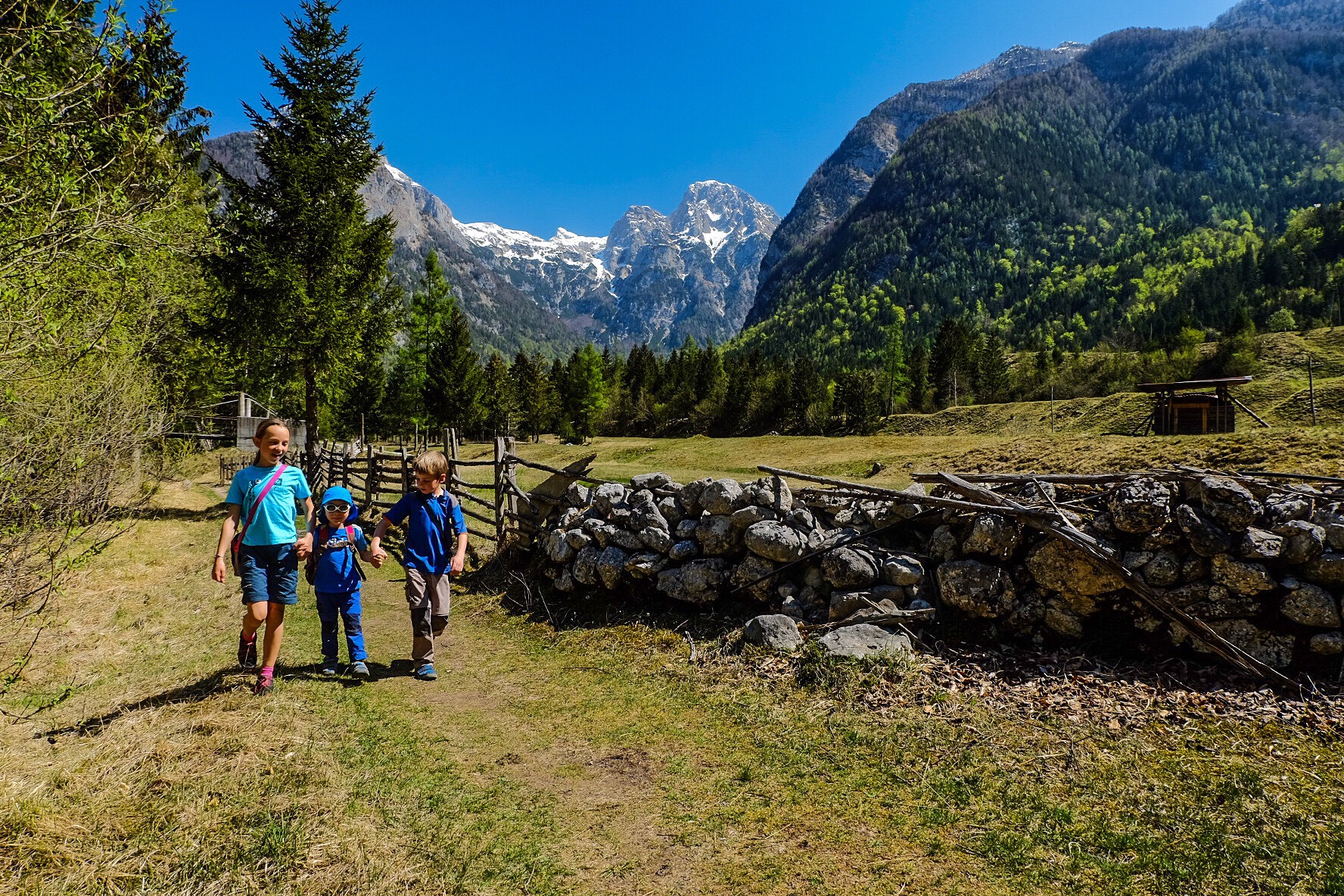 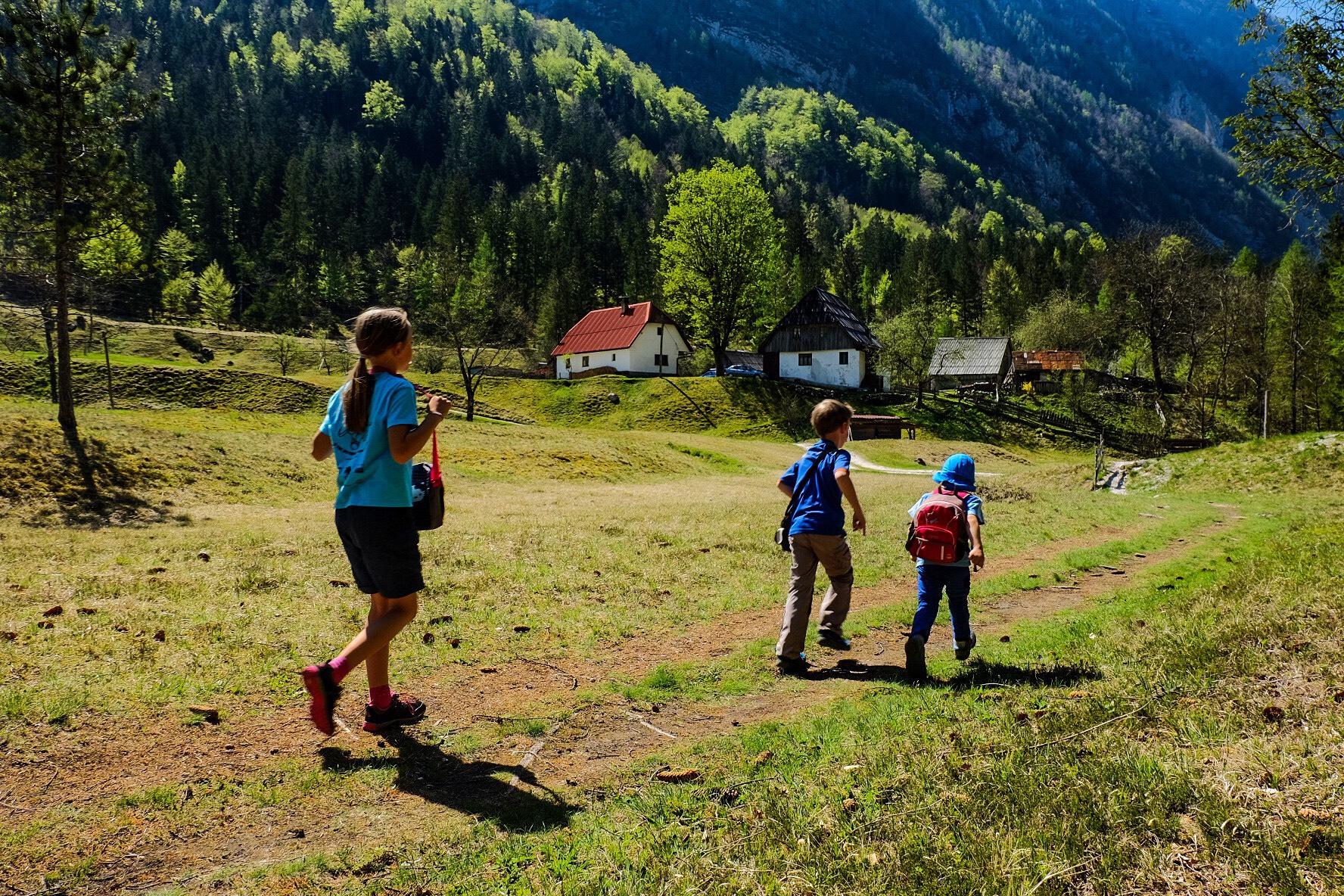 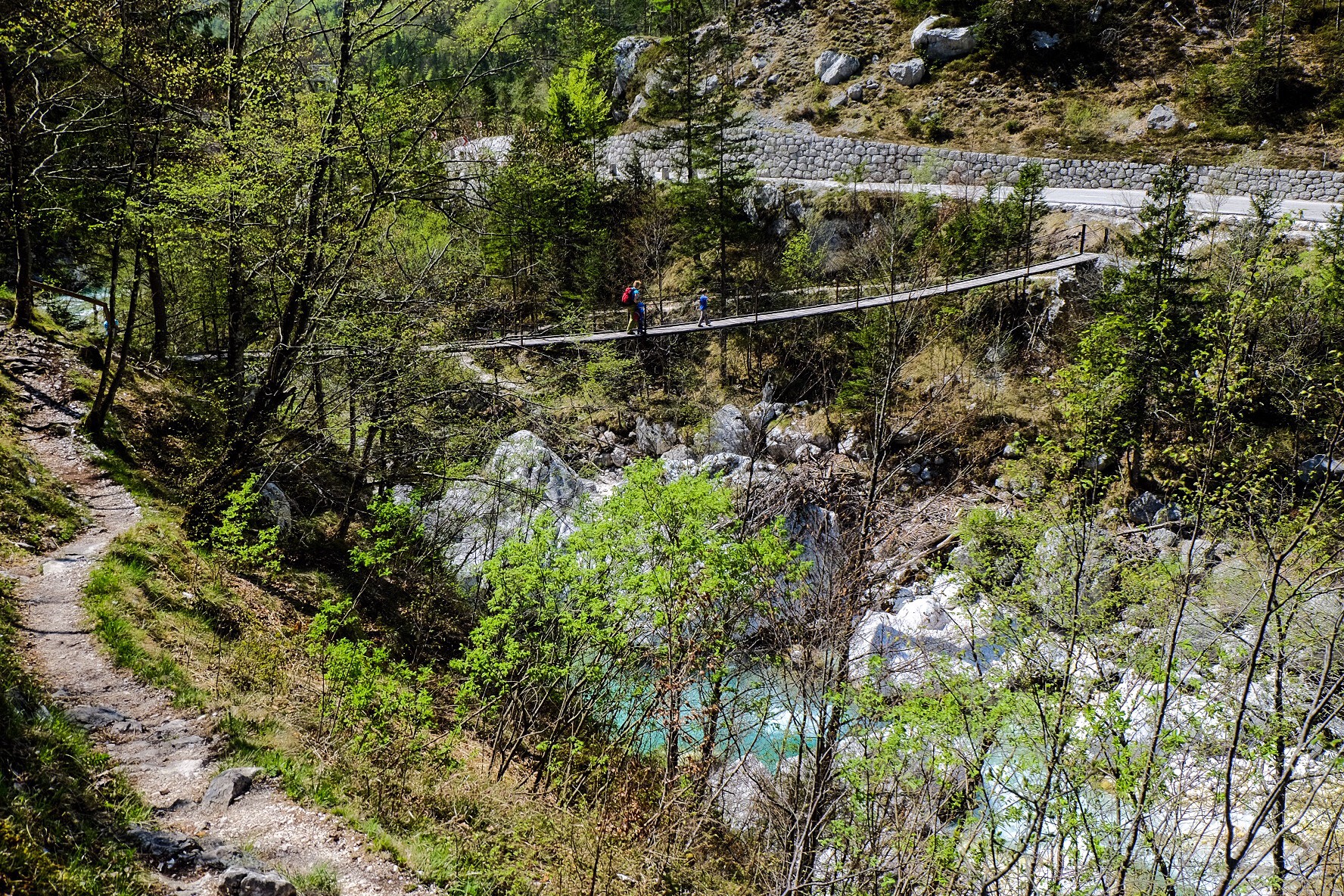